The ventilation device installed on the top of the fixed storage tank can reduce the evaporation loss of oil and other liquids, control the pressure of the storage tank, and prevent the tank from being damaged by overpressure or vacuum. The types are pipe away breath valve, single suction valve and breathing valve. All kinds of structures can be combined with flame arrester, and the required connecting pipe can also be prepared. How many breathing valves should be installed in a storage tank? 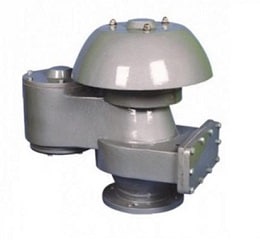 2. spring type mechanical breathing valve
Spring type mechanical breathing valve is composed of valve body, upper and lower valve disc, spring, guide rod, etc. It mainly relies on the balance of spring tension and thrust generated by pressure difference inside and outside the tank. Spring type mechanical breathing valve has no strict requirements on the weight of the disc, so it can be made of non-metallic materials (such as polytetrafluoroethylene) to reduce the risk of freezing the valve disc. The control pressure of the breathing valve can be adjusted by changing the compression length of the spring. When the pressure inside the tank reaches the control positive pressure of the valve, the lower valve disc drives the upper valve disc to rise together, and the valve seat is separated and the oil tank exhaled; When the negative pressure in the tank reaches the control negative pressure of the valve, the lower valve plate drops, and it is separated from the upper valve disc, and the oil tank inhales. The breathing valve is compact in structure, small in volume and light in weight, but after long-term use, the spring is easy to rust, and the valve disc is easy to deform, which makes its air tightness reduced. When used in cold areas, frost on spring may affect spring activity, and valve disc can not be opened according to preset control pressure.